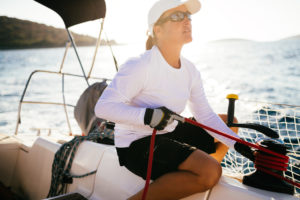 Let me introduce you to ’George’. She’s a key character in my novel Draca, with almost 2/5 of the story in her ‘voice’. In a previous post I introduced Jack, the flawed hero of Afghanistan. George is a feisty orphan – with – attitude. She’s made her own way from care homes to be manageress of the local boatyard. As I crafted the book, George acquired a tough, shoulders-back manner that hid her vulnerabilities. By the time I had finished writing the book I think I was a little in love with her.

George is also a very competent yachtswoman. I’m an indifferent sailor, so writing credible storm scenes required a lot of research and imagination. That must have paid off; a former Yachtsman of the Year gave me an excellent quote for the cover.  ‘A cracking, believable yarn made even more authentic by the wonderfully descriptive sailing scenes...’

Orphan – with – attitude at Eddie’s funeral

George could learn a lot from watching people. At first, everyone looked the same. All in black, all with that funeral look as if they wore a passport photograph where their faces should be. She could make out the Ahlquist crowd, all hugs and kisses except Jack, and then there was an older man and two women who stood a bit apart, both more smartly dressed than the rest, and the only women in hats. A husband, wife and daughter, at a guess. The man was a short, lean, military type who stood very square. When people came up to the older woman, she offered her hand palm-down, fingers drooping, as if she expected them to go down on one knee and kiss it. No one stayed with them, and the three kept to themselves as if they knew it was pointless to try to talk.

Jack moved between them and the rest, half belonging to both groups, neither oil nor water, looking stressed. Like all the men he was sweating in his dark suit, with spots of damp staining his shirt across his chest. The younger woman must be his wife, so the military man and the duchess were the in-laws, and the families didn’t get on.

Jack waved when he saw George. Nothing too enthusiastic, but enough for her to wander over and say hello. She was ready for the mother-in-law’s fingers. If you slide your hand under that kind of regal greeting, then grip and twist, you can turn it into a proper handshake. The duchess didn’t like that. She didn’t like George’s looks, either. The duchess was tall enough for her eyes to be at the level of George’s hair, and George saw her wince. So what? George liked orange. It’s a strong colour, and it was only a streak. While Jack fumbled the introductions the woman’s eyes dropped so she was looking down her nose at George’s skirt, and her mouth pursed into a tight, wrinkly, cat’s–arse circle of disapproval. Maybe yellow was a bit bright for a funeral, but there wasn’t much call for dark, smart stuff in a boatyard. At least George had put a decent jacket over it, and she bet the duchess couldn’t tell that the jacket came from a charity shop.

Draca, described as ‘a really cracking read’ by General Sir Peter Wall, will be released by Unbound on 14th May 2020. Half the royalties will flow to the veterans’ charity Combat Stress. Click here for more details of the book, including stunning early reviews.

If you’d like to order the book there are links to many retailers including Waterstones and Foyles here. Just click the ‘buy’ link.

If you’d like to go directly to Amazon UK, the paperback is here and Kindle here.

There’s another character with his own version of events to tell as the story unfolds. Jack’s father is a dominating, controlling presence, and just because he’s opinionated doesn’t mean he’s always wrong. You’ll meet him next.