Prisoner of War Diaries: Decorated by the Enemy 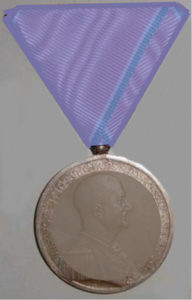 My last post told how I’ve been reading my father’s prisoner of war diaries in the run-up to VE Day. See here for how he came to be a PoW, and the needless tragedy of the SS officer’s family. In May 1945 Dad was in a small labour camp in the Austrian Tirol. German forces south of the Alps capitulated on 2nd May, and the camp was then unguarded. On 6 or 7 May, Dad and two other sergeants set out on a reconnaissance. By the end of the day they were very drunk, and saying ‘they’ll never believe this back home’.

On the road below the camp two officers in a German staff car stopped the three sergeants before they could hide. One officer asked “You are British?” then “You will get in, please.” They were driven some distance up a well-wooded valley, through a major encampment. The car stopped at a large building that was apparently the officers’ mess. A senior officer explained, in German, that they were what remained of a Hungarian division. They had been fighting on the Eastern Front, where Russian troops were exacting a terrible revenge on captured Hungarian soldiers. Soon the three would meet their General, who would explain why they were there. The officer stood at Dad’s shoulder and translated his General’s words into German, their only common language. Here’s how Dad described the events that followed.

‘By the time [the General] came in his officers had arranged themselves into two ranks.. we all stood firmly to attention.

From the moment the general started to speak I felt desperately sorry for him. For him this was deadly serious: he delivered his words as if they might be the last act of his service. [He was] tall, slim, greying at the temples, looking tired and care-worn. He should not have been doing this in front of three lowly sergeants who were no more than prisoners in his own war, but to a high officer of at least equivalent rank. He went on ‘I promised to deliver this valiant unit into the hands of the first British or American forces into whose hands we chanced to fall…’

There was no pleasure whatsoever for him in this. He concluded ‘therefore by virtue of the powers vested in me as commander of this division, and with the full consent of my officers, I surrender to you myself, my officers, and all the men, vehicles and equipment of this division.’ He stepped forward and pinned a medal with a maroon ribbon on my chest. His officers applauded loudly; we were just thoroughly dumbfounded.’

A party followed. After three years without alcohol, the impact was immediate. As they staggered out into the sunlight, a drunken Hungarian Captain put his arm around Dad’s shoulders, waved a bottle of vodka around the lines of tents and vehicles, and said (still in German) “Ish all yoursh. Take wha’ you want.”

They took his staff car.

I believe they crashed the staff car on the way back. When the hangover faded Dad found himself, as a sergeant prisoner of war, nominally in charge of a Hungarian division. Law and order was breaking down locally, and British troops were still about 25 miles away. Well-armed SS troops choked the roads and towns in between, and at least some of them wanted to fight on. Tomorrow I’ll describe how Dad’s war ended.

I am again indebted to my brother for his meticulous work transcribing our father’s prisoner of war diaries  and reminiscences.

Dad always felt bad about the Hungarian soldiers. In a few days contact he found them to be professional, and in his limited experience honourable men who had surrendered in good faith. They were briefly his responsibility. Thanks to an agreement between Churchill, Roosevelt and Stalin, the Hungarians became prisoners of the Russians, and all disappeared into Stalin’s gulags. As Dad later wrote;

‘It is not the sort of thing one easily forgets, and it has troubled my conscience to this day.’