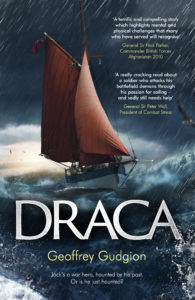 Draca’s launch was supposed to happen today. Tonight I expected to be sipping a celebratory champagne, basking in the glory of the first reviews. After all, all Draca’s wonderful supporters were going to have their copies early, weren’t they?

Enter Corona-chaos. I.E: Publishers, printers, distributors, and logistics companies all working with reduced staff on socially-distanced shifts. Massive dependency on Amazon, since bookshops and libraries are shut. Amazon working to priorities as arcane as their algorithms. End result:

So here, lovely people, is how to acquire a print copy of Draca during Corona-chaos:

Go to the publisher, Unbound, here. For £9.99 they will ship you a copy, just like Amazon. They will even cover the cost of UK postage. For £4.99 they will also sell you an ebook or Kindle version if that’s what you want.

Message me. Contact me via the web site. Email me, whatever is easiest. I am assured that a stack of copies is on its way, so when that arrives I will send you a signed copy, with a dedication if you wish, for £10 via PayPal. Just add your desired dedication to the PayPal message. And yes, I too will cover UK postage. While stacks last, as they say.

For more information about Draca, including extracts, click here. No less an authority than General Sir Peter Wall calls it ‘a really cracking read’. Remember half the royalties go to the veteran’s charity Combat Stress.