The Venal and the Divine 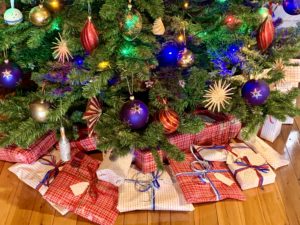 It was a weekend of contrasts. On Friday, I thought the traffic was even more intense, more impatient than usual. The evening news showed shoppers in feeding frenzies, coming to blows as the stores opened their doors on Black Friday. Christmas cometh, grab your wallets and fight. There were images of men rolling on a floor, grasping at the same package of some massively-discounted item, and of shoppers pushing away stacked trolleys, their faces alight with greed.
On Sunday evening, our local church had its Advent carol service. In candle-lit peace, twenty-eight choristers sang anthems in four-part harmony. Gentle at first, as sweet as the carols and readings they framed, the pace grew until the choir let rip with the 14th century Resonemus Laudibus. It was fast, it was loud, it was triumphant. And at least for one hour the poorest of the congregation, or the choir, was richer than any retailer. The faces that spilled out into the night afterwards shone with a different kind of joy.
Christmas cometh.