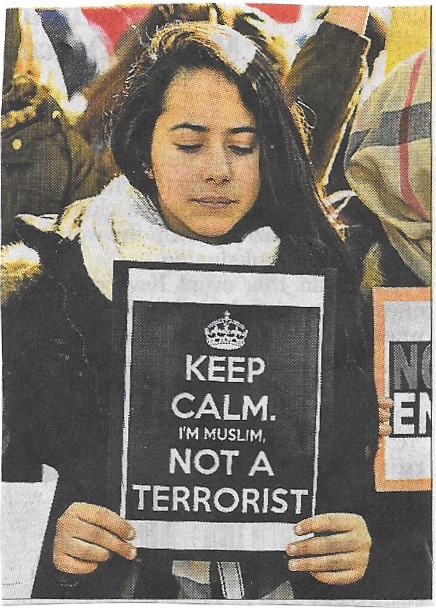 Of all the images I’ve seen since the Charlie Hebdo and Jewish supermarket atrocities, the one that stays most in my mind was in the UK Daily Telegraph. It’s a young woman on a march in Madrid, a dark-haired, olive-skinned, apparently Spanish beauty. Her eyes are lowered, and she lets the placard in front of her shout her message. It’s written under the crowned ‘Keep Calm’ theme that seems to be everywhere at the moment, and it says, simply,

KEEP CALM, I’M A MUSLIM, NOT A TERRORIST

Brilliant. That young woman deserves huge respect.
But in the last few days, the debate has moved on to ‘free speech’, or ‘freedom of expression’. Should the Western democracies’ hard-won right to lampoon our leaders, even religious leaders, be curtailed if that right is used to lampoon a faith?
The arguments are surging backwards and forwards. Even the Pope has contributed. But I haven’t yet seen anyone address the practicalities of how such a law would be drafted. Clearly, it must ‘protect’ all faiths equally, so Monty Python’s ‘Life of Brian’ might have had its last repeat. By the same principle, it must regard all faiths as equal. In defending minority sensitivities, there can be no such thing as a ‘minority’ that is not worthy of being defended. We’re going to need a whole new Government department of censors who can consider, with ernest political correctness, whether blockbuster films such Exodus can be released if they are deemed to show Ra and Osiris unfavourably against the God of the Israelites. These brave public servants will have to live and work in bunkers to guard them from aggrieved factions who disagree with their decisions.
Let’s think this one through…